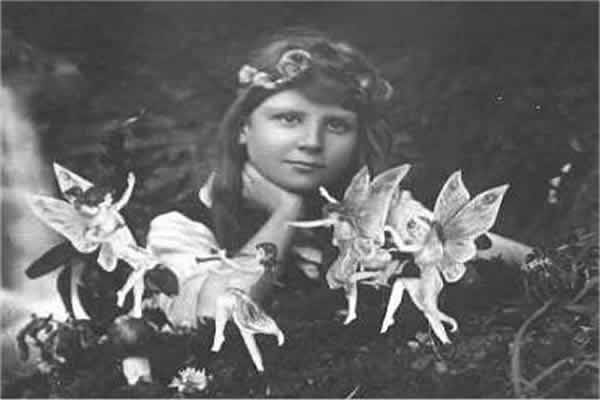 The Cottingley Fairies appear in a series of five photographs taken by Elsie Wright and Frances Griffiths, two young cousins who lived in Cottingley, near Bradford in England. In 1917, when the first two photographs were taken, Elsie was 16 years old and Frances was 10. The pictures came to the attention of writer Sir Arthur Conan Doyle, who used them to illustrate an article on fairies he had been commissioned to write for the Christmas 1920 edition of The Strand Magazine. Conan Doyle, as a spiritualist, was enthusiastic about the photographs, and interpreted them as clear and visible evidence of psychic phenomena. Public reaction was mixed; some accepted the images as genuine, but others believed they had been faked.

Interest in the Cottingley Fairies gradually declined after 1921. Both girls grew up, married and lived abroad for a time. Yet the photographs continued to hold the public imagination; in 1966 a reporter from the Daily Express newspaper traced Elsie, who had by then returned to the UK. Elsie left open the possibility that she believed she had photographed her thoughts, and the media once again became interested in the story. In the early 1980s Elsie and Frances admitted that the photographs were faked using cardboard cutouts of fairies copied from a popular children’s book of the time, but Frances continued to claim that the fifth and final photograph was genuine.

The photographs and two of the cameras used are on display in the National Media Museum in Bradford.

All or part of the article above was taken from the Wikipedia article Cottingley Fairies, licensed under CC-BY-SA.