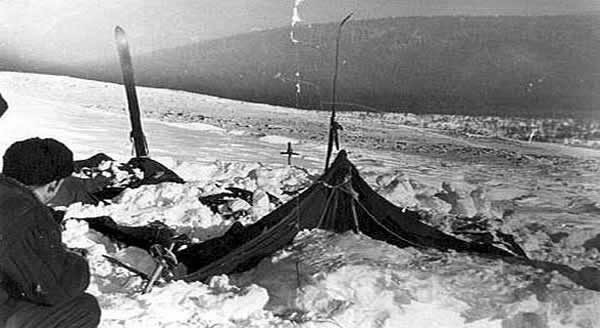 The Dyatlov Pass incident refers to an event that resulted in the deaths of nine ski hikers in the northern Ural mountains on the night of February 2, 1959. It happened on the east shoulder of the mountain Kholat Syakhl (Холат Сяхл) (a Mansi name, meaning Mountain of the Dead). The mountain pass where the incident occurred has since been named Dyatlov Pass (Перевал Дятлова) after the group’s leader, Igor Dyatlov (Игорь Дятлов).

The lack of eyewitnesses and subsequent investigations into the hikers’ deaths have inspired much speculation. Investigators at the time determined that the hikers tore open their tent from within, departing barefoot in heavy snow. Though the corpses showed no signs of struggle, two victims had fractured skulls, two had broken ribs, and one was missing her tongue. According to sources, four of the victims’ clothing contained substantial levels of radiation. There is no mention of this in contemporary documentation; it only appears in later documents.Soviet investigators determined only that “a compelling unknown force” had caused the deaths. Access to the area was barred for skiers and other adventurers for three years after the incident. The chronology of the incident remains unclear due to the lack of survivors.

A group was formed for a ski trek across the northern Urals in Sverdlovsk Oblast (Свердло́вская о́бласть). The group, led by Igor Dyatlov, consisted of eight men and two women. Most were students or graduates of Ural Polytechnical Institute (Уральский Политехнический Институт, УПИ), now Ural State Technical University:

The goal of the expedition was to reach Otorten (Отортен), a mountain 10 kilometers north of the site of the incident. This route, at that season, was estimated as “Category III”, the most difficult. All members were experienced in long ski tours and mountain expeditions.

The group arrived by train at Ivdel (Ивдель), a city at the center of the northern province of Sverdlovsk Oblast on January 25. They then took a truck to Vizhai (Вижай) – the last inhabited settlement so far north. They started their march towards Otorten from Vizhai on January 27. The next day, one of the members (Yuri Yudin) was forced to go back because of illness. The group now consisted of nine people.

Diaries and cameras found around their last camp made it possible to track the group’s route up to the day preceding the incident. On January 31, the group arrived at the edge of a highland area and began to prepare for climbing. In a woody valley they cached surplus food and equipment which would be used for the trip back. The following day (February 1), the hikers started to move through the pass. It seems they planned to get over the pass and make camp for the next night on the opposite side, but because of worsening weather conditions, snowstorms and decreasing visibility, they lost their direction and deviated west, upward towards the top of Kholat Syakhl. When they realized their mistake, the group decided to stop and set up camp there on the slope of the mountain.

All or part of the article above was taken from the Wikipedia article Dyatlov Pass incident, licensed under CC-BY-SA.